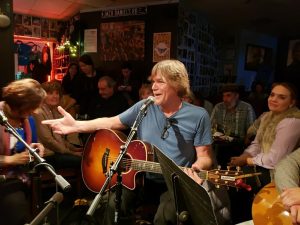 “Probably the best guitar player in comedy. Or the best comedian in guitar-playing”  The Tennessean

Greg Hall, guitar in hand, delights audiences nationwide with his songwriting, singing, and humorous observations of life in America. His entertainment career began in Texas as a singer/songwriter after winning a Kennedy Center award for Outstanding Achievement in Musical Composition. “In college I wrote the score for a Garcia Lorca play on an old Gibson Blue Ridge 12 string. The guitar won that award. You could play E minor and sound omnipotent,” he says with a smile. Based in Nashville, Hall headlines comedy venues around the country and for over thirty years has played music in diners, drive-ins, and dives.

“Texas in the late 80s was a wonderful school to learn how to be a lone troubadour. I’d watch and open shows for guys like Ray Wylie Hubbard, Steven Fromholz, Jimmie Dale Gilmore, Shake Russell, Jimmy La Fave, and the like. They were the real deal. We were Americana before the genre had a name.” The next decade took Hall on a musical journey through thirty states and Europe. Along the way he shared stages with Shelby Lynne, Vern Gosdin, Jerry Jeff Walker, Eric Johnson, The Fabulous Thunderbirds, Keith Urban, Dan Seals, and others. 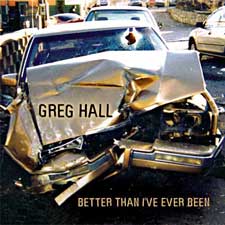 Then came the car wreck, and the comedy. After recovering from a near fatal car wreck in 1999, Hall took a dare to get on a comedy stage and wound up being booked as a comedian for the next 15 years. “I never put down the guitar, or stopped singing and writing. It just went in a different direction. Comedy clubs are fun. You get great hotels, in great places, and I work from Wisconsin to the Bahamas. I still do them, though the music gigs seem to be taking over.”  Hall says the one-on-one, direct communication learned in stand-up translates to his current music shows. “I love combining the two. Talking with and connecting with the crowd through stories and songs is the joy of the gig.” 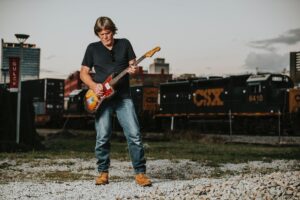 Hall’s love for singing his original songs was resurrected after opening a PBS Soundstage taping for Kenny Loggins and Jim Messina in 2016. “Hearing those guys play ‘House on Pooh Corner,’ ‘Watching the River Run,’ and ‘Danny’s Song’ took me back to watching them on Midnight Special with my parents when I was a kid. I realized I started as a Texas singer/songwriter/guitar player, and that’s how I will end. I just tell better stories now,” he says with a grin. Better stories indeed. Hall observes life’s mishaps with a twinkle in his eye, and hope. The result is an achingly fun musical journey sharing his hard-won, slightly skewed wisdom. His latest and 5th studio album of original songs, “Beauty from Ashes,” was released in 2019 to critical acclaim. “I’m very happy with it and the amazing musicians who backed me.”

Greg in the News:

To read about Greg in The Dallas Morning News, click here.

To read about Greg in the Tennessean, click here.